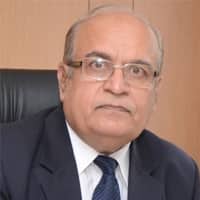 Dr. R. K. Malhotra is a Mechanical Engineer from IIT, BHU and Ph.D. from IIT, Delhi. He is  Director General at Federation of Indian Petroleum Industry. He was earlier Board member at Indian Oil Corporation as Director (R&D) and also held additional charge as Chairman before superannuation in June, 2014.  He has more than 41 years of experience in the oil industry.  He has authored more than 200 research papers and holds 138 patents, granted in India & abroad. He is professionally active as the President of Hydrogen Association of India.  In the past, he has also held positions of President of Society of Automotive Engineers  & Indian Chapter of International Council of Combustion Engines and Chairman of the Petroleum Divisional Council of Bureau of Indian Standards. He is presently the Chairman of the Central Pollution Control Board Committee for formulations of emission standards for gensets and Chairman of the Research Council of CSIR-IIP. He was bestowed with Rudolf A. Erren Award (2012) by the International Association of Hydrogen Energy. He also received "Global Excellence Award" for his contributions in Renewable energy sector and also the IIT-BHU Alumni Award for excellence in R&D.