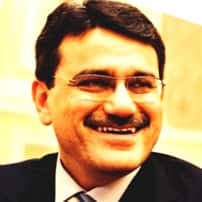 Manoj Kohli is the Executive Chairman of the SB Energy – SoftBank Group, which plans to invest $20 billion into solar energy projects in India. It is already operating 350MW of solar project in AP. It has signed a MoU of 200GW with Saudi Arabia and plants to enter Africa soon.

Before taking over this project, Manoj was the Managing Director, Bharti Enterprises Limited and responsible for the growth and operations of the Bharti group of companies in retail, insurance, agri-products, real estate, mobile internet sector. Manoj’s key contribution has been building Airtel as no 3 telco in the world with over 360m customers. He led Bharti Airtel’s India operations during which the customer base grew from 2 million to 150 million before moving to International responsibility in 2010. Manoj was the Chairman of the Industry Association, COAI which deals with Government resolving all regulatory policy matters. He was the Managing Director and CEO (International), Bharti Airtel, as he headed the International Business Group which leads the international strategy & vision for 20 countries and was also responsible for leading the Africa operations which Bharti Airtel acquired in June 2010.

Manoj started his career in 1979 with the DCM Shriram Group, where he initially led the HR function, followed by leadership positions in the Foods, Chemicals and Fertilizer businesses and assignments in Engineering projects, including Shriram Honda. He left as Vice President, responsible for the Air Conditioning & Refrigeration business unit (Tecumseh & Daikin) after a stint of 15 years. He subsequently worked for 15 years at AlliedSignal / Honeywell as its Executive Director in charge of its new Industrial Park and operations in India. Manoj then joined Escotel, which he led for over 5 years as Executive Director and CEO, before coming on board at Bharti Airtel.

Overall his 39 years of work experience is divided between the manufacturing and telecom sectors. Manoj has worked closely with MNCs as well as worked at Michigan, Austria, Tokyo, Shanghai, Manila, Singapore, HK and supervised 20 countries in Africa in addition to all four regions in India.

Manoj was the Chairman, Public Policy Committee of GSM Association (GSMA). In the past, he was a Board Member of GSMA in 2008 and reappointed to the GSMA Board in 2012. Manoj is also associated with Confederation of Indian Industry (CII) as Chairman of National Task Force for EVs & storage batteries. Prior to this he has held the post of Chairman – Confederation of Indian Industry (CII) National Committee on Telecom & Broadband. He was adjudged “Telecom Man of the Year” in 2000 and “Telecom Person of the Year” in 2004 by Media Transasia and Voice & Data respectively. He is a member of the Academic Council of the Faculty of Management Studies and has been awarded the “Best Alumni Award” by Shriram College of Commerce, Delhi University.