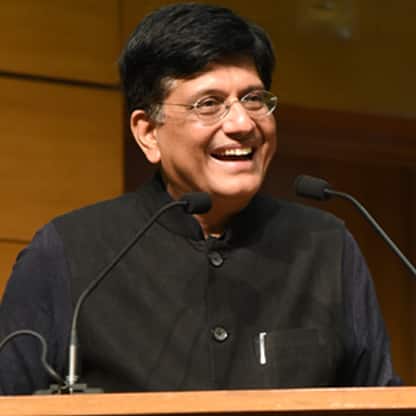 Piyush Goyal (57) is the Minister of Commerce & Industry (2019-present), Consumer Affairs, Food & Public Distribution (2020-present), Textiles (2021-present), and Leader of the Rajya Sabha (2021-present). He was earlier the Minister of Railways (2017-21). He has also held the additional charge of Minister of Finance and Corporate Affairs twice in 2018 and 2019. His previous portfolios include- Minister of Coal (2014-19), Minister of State (I/C) for Power, New & Renewable Energy (2014-17), and Mines (2016-17). As Minister of Railways, over the last two years of his tenure Railways achieved its best ever safety record of zero passenger deaths in accidents. This was achieved through holistic measures such as elimination of Unmanned Level Crossings (UMLCs) from the broad gauge network, production of safer coaches etc. Additionally, Mr Goyal oversaw the launch of the first indigenous semi-high speed train Vande Bharat Express between Delhi and Varanasi. The Power, Coal and New & Renewable Energy ministries led transformational changes in India’s power sector including the fast tracking of electrification of the nearly 18,000 unelectrified villages in some of the remotest and inaccessible parts of the country, the roll out of the most comprehensive power sector reform ever (UDAY), the success of the world’s largest LED bulb distribution programme (UJALA) for energy efficiency, and massive proliferation of renewable energy through the world’s largest renewable energy expansion programme. Other achievements include the elimination of coal shortages to improve the energy security of India and successful conduct of transparent e-auctions of coal blocks. He also received the 4th Annual Carnot Prize in 2018 recognising the pathbreaking transformations in India’s energy sector. During his 35 year long political career, Mr Goyal has held several important positions at different levels in the world’s largest political party, the Bharatiya Janata Party (BJP) and is in its National Executive. He has been the National Treasurer of the Party. In the 2019 Indian General Elections, he was a member of the Manifesto and Publicity Committees. He also headed the BJP’s Information Communication Campaign Committee for the Indian General Elections 2014. Mr Goyal has had a brilliant academic record – all-India second rank holder Chartered Accountant and second rank holder in Law in Mumbai University. He was a well-known investment banker and has advised top corporates on management strategy and growth. He also served on the Board of India’s largest commercial bank, the State Bank of India and Bank of Baroda. He was also nominated by the Government of India to the Task Force for Interlinking of Rivers in 2002. His father, Late Vedprakash Goyal was Union Minister of Shipping, and the National Treasurer of the BJP for over two decades. His mother Chandrakanta Goyal was elected thrice to the Maharashtra Legislative Assembly from Mumbai. He is married to Seema, an active social worker, and has two children – Dhruv and Radhika, who have both graduated from Harvard University, USA.