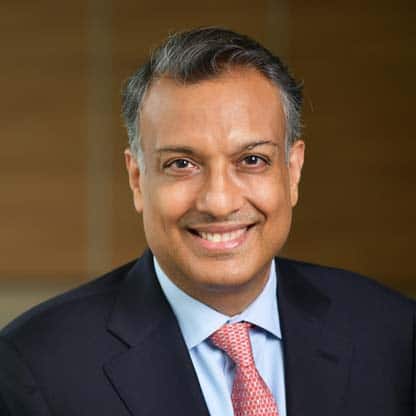 A leading first-generation entrepreneur, Sumant Sinha is the Founder, Chairman and Managing Director of ReNew Power – one of India’s largest clean energy companies. Sumant founded ReNew Power in January 2011, with a vision to transform the way energy is produced and consumed in India. Since then, under his leadership, the company has grown exponentially and is today one of India’s premier renewable energy companies with an aggregate portfolio of more than 10 GW spread over more than 100 sites. A passionate advocate for solutions related to climate change, Sumant is Co-Chair of the Electricity Governor’s Group and member of Stewardship Board on Shaping the Future of Energy at the World Economic Forum, Chair of The Climate Group’s India Advisory Board and CII’s Renewable Energy Council and a member of the Advisory Council of India Climate Collective. He is a Board member of the US India Strategic Partnership Forum (USISPF) and Senior Vice President of the Associated Chambers of Commerce & Industries of India (ASSOCHAM). Sumant is also on the Board of Governors of IIT Delhi, IIM Calcutta and the School of International & Public Affairs at Columbia University, and is also an alum of the same three institutes. He is a regular speaker at leading thought leadership platforms such as World Economic Forum at Davos, Climate Week NYC, CERA Week as well as leading global universities. He has also authored a book - Fossil Free: Reimagining Clean Energy in a Carbon-Constrained World which is about the past, present and future of the world’s energy systems in the context of the world’s changing climate and spells out a playbook to create a carbon light future for India. For his achievements, Sumant has won several awards including the UN Global Compact’s “SDG Pioneer for India, 2020”, “Chairman Of The Year” at the Stevie International Business Awards 2020, The Entrepreneur India’s Entrepreneur of the Year award, 2019, the coveted “Economic Times Entrepreneur of the Year Award’ 2018 and “EY Entrepreneur of the Year”, 2017”. Prior to turning entrepreneur, Sumant worked as an investment banker with Citicorp and ING Barings in US & UK and upon his return to India, as CFO of the Aditya Birla Group and COO at Suzlon.