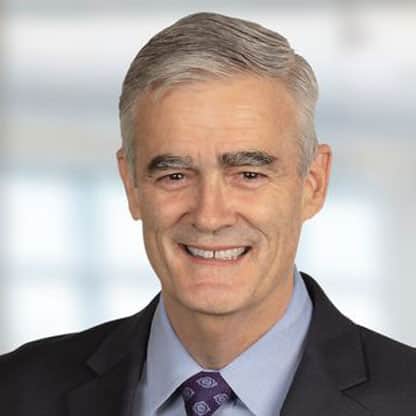 Michael Train was named Emerson’s first chief sustainability officer in March 2021. In this role, he leads the company’s environmental sustainability strategy, with a focus on advancing technologies and advocacy to enhance company operations and enable customer improvements through Emerson’s solutions and partnerships. He joined Emerson’s Office of the Chief Executive, which helps develop and guide the company’s global business strategies, in 2016. From 2018 to March 2021, Train served as president of Emerson, where he oversaw software and digital technology development, major investments, international growth and global shared service organizations. Train began his career at Emerson in 1991, starting as an international planner, and was promoted to vice president of planning and development for Emerson Asia-Pacific in 1994. He became president of Emerson in Japan and Korea in 1996, before moving back to the United States to lead Emerson’s planning group from 1997 to 2002 as corporate vice president of planning and international. In 2002, Train returned overseas when he was named president of Emerson Process Management Asia-Pacific, a role he held until 2008. From 2008 to 2010, Train served as president of Emerson’s Rosemount business. From October 2010 to April 2016, Train served as president of global sales for Emerson Process Management. In the latter role, he oversaw five world area regional organizations focused on sales, service, support and customer satisfaction across all products and services provided by Emerson Process Management. In April 2016, Train was named executive president of Emerson’s Automation Solutions business, managing strategy and operations for one of the company’s two business platforms. In this role, he led initiatives to help industrial customers enhance their operations to achieve Top Quartile performance. Train currently serves as chairman of the board of trustees at Ranken Technical College and on Cornell University’s Samuel Curtis Johnson Graduate School of Management Advisory Council. He was a 2008 Eisenhower Fellowship recipient. Train holds a bachelor's degree in electrical engineering from General Motors Institute and a master’s degree in business administration from Cornell University.