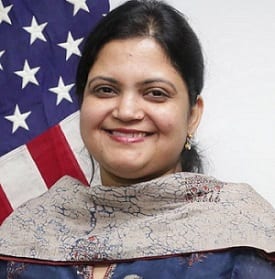 Ms. Mehnaz Ansari heads the United States Trade and Development Agency’s (USTDA) office for the South Asia Region. She is based at the US Embassy in New Delhi. She is responsible for managing USTDA’s South Asia office operations and leads USTDA activities in advancing host country development priorities, US industry trade interest and US government’s foreign policy objectives. India is USTDA’s largest portfolio worldwide. Traditionally, USTDA’s functions have been in the areas of Civil Aviation and Clean energy, under Mehnaz’s stewardship, it has expanded to include sectors such as Rail, Ports, Smart Cities, Oil and Gas, Healthcare, ICT, Executive Education and Finance. She has been instrumental in bringing in procurement training through agency’s initiative called Global Procurement Initiative and initiating first of such training in South Asia. She was also the first to partner with the World Bank on working together on Digital Infrastructure and Smart Cities in South Asia. She actively works with the governments in South Asian countries such as India, Bangladesh, Sri Lanka, Nepal, Pakistan, Maldives, Afghanistan amongst others and is part of the team Indo-Pacific for her agency. She has engaged Bangladesh Rail and Inland Waterways to develop new opportunities for US- Bangladesh partnerships.

Mehnaz represented USTDA on its two-signature public-private partnerships in India—the US–India Aviation Cooperation Program (ACP) and the US–India Energy Cooperation Program (ECP). She is a member of the Government of India’s Consultative Committee on Smart Cities for Andhra Pradesh, Rajasthan and Uttar Pradesh. She is a member of the Global ICT Sector Team.

A recipient of multiple USG Mission and Industry awards, Mehnaz is also a member of US Mission’s Gender Empowerment Committee and life member of Women in Aviation-India Chapter and The Rotary Wing Society of India.

Mehnaz is married to Dr. Syed Naseer Hussain, Member of Parliament Rajya Sabha from Karnataka and National Spokesperson for All India Congress Committee. They have two sons 14-year-old Hashir and 9-year-old Tahir. She is passionate about reading, cooking and loves being a soccer mom.