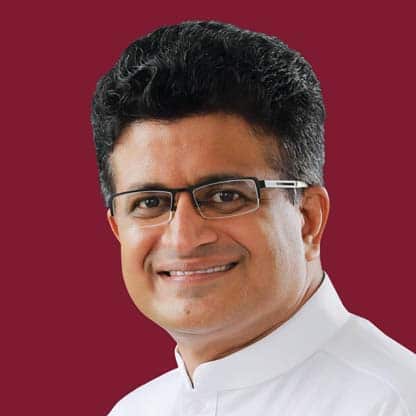 Udaya Gammanpila secured the highest marks at the General Certificate for Education (Advanced Level) in 1988 and received a scholarship to Monash University in Melbourne, awarded by the Australian government. Udaya became an Assistant Lecturer of the university while studying in his fourth year for Bachelor of Computing (Information Systems). After returning to Sri Lanka, Udaya joined Australia – Lanka Group as a management trainee in 1994 became the Director and CEO of the Group in 1996. Udaya held directorates in several leading companies during his short stay in the corporate sector. Udaya left the corporate sector in 2000 to engage in nationalist politics on fulltime basis soon after launching ‘Sihala Urumaya’ which was later known as ‘Jathika Hela Urumaya’ (JHU). Udaya held posts of Propaganda Secretary, Administrative Secretary, Deputy General Secretary and Treasurer of the party. In 2014, he left the JHU opposing its decision to support Presidential Candidate Hon Maithripala Sirisena. He supported President Mahinda Rajapakse at the presidential election after founding a new political party called “Pivithuru Hela Urumaya”. Udaya was a member of All Party Representative Committee (APRC) appointed by HE the President in 2007 to formulate a solution to the crisis in the North and East. Udaya is also a member of the Advisory Council for Ministry of Constitutional Affairs and National Integration. He is also a member of National Economic Council chaired by HE the President. Being an Environmentalist, Minister of Environment appointed Udaya as his senior advisor in February 2007. Subsequently, HE the President appointed him as the chairman of the Central Environmental Authority. Udaya has been a political columnist of Lankadeepa, Sinhala daily with the highest circulation, since 2002 and of Ceylon Today since 2012. In April 2009, Udaya made his entry to electoral politics by contesting for the Western Provincial Council from Colombo District. His environmental friendly modern electronic media based propaganda campaign was the highlight of the election. After securing victory at the election, he became the Minister of Agriculture, Minor Irrigation, Industries & Environment (Western Province). In 2014, in his campaign for re-election, Udaya was again at the limelight by collecting Rs 100/- each from general public for his campaign expenses as a step towards good governance. After collecting Rs 4.3 million from this campaign he published his accounts for election campaign with all receipts, bank statements, bills and invoices. It is first time in Sri Lanka, probably in the world, a politician presented accounts for his election expenses in a self-auditable manner. After a successful election campaign, he was appointed as the Minister of Agriculture, Minor Irrigation, Industries, Environment, Arts & Cultural Affairs (Western Province). In September 2014, he was unanimously elected as the Co-chairperson of the Network of Regional Governments for Sustainable Development to represent Southern nations. It is the only environmental organization of subnational governments recognized by the United Nations. Udaya, with three other political party leaders, pioneered the campaign to bring back then retired President Mahinda Rajapaksa to politics in 2015. He initiated the campaign for nominating Gotabaya Rajapaksa as the presidential candidate of Sri Lanka People’s Party (SLPP). Udaya is reputed as a spearhead of the subsequent campaign as well as an articulate debater and an orator of his generation. Udaya was elected as a Member of the Parliament representing Colombo District in 2015 and again in 2020 securing positions among the top three candidates gaining highest number of preferential votes. He made a statement in the society with environmentally friendly campaigns in both these occasions beating the popular odds among Sri Lankan political campaigns. He is now a co-cabinet spokesperson, Chairman of Sri Lanka Australia Parliamentary Friendship Association and a Member of the Committee on High Posts. Udaya is the leader of Pivithuru Hela Urumaya (PHU) and the Minister of Energy.