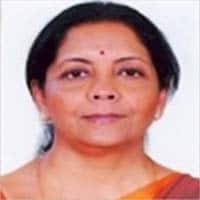 Nirmala Sitharaman is the Minister of Finance and Minister of Corporate Affairs, Government of India. She is a member of the Rajya Sabha, Upper House of the Indian Parliament, since 2014. Smt. Sitharaman served as the Defense Minister, Government of India from 3 September 2017 to 30 May 2019; Minister of State (Independent Charge) of the Ministry of Commerce and Industry from 26 May 2014 to 3 September 2017; and Minister of State in the Ministry of Finance and Minister of State in the Ministry of Corporate Affairs from 26 May 2014 to 9 November 2014. She is the member of the Bharatiya Janata Party (BJP) National Executive since 2008. She served as a National Spokesperson for the BJP from 2010 to 2014. Smt. Sitharaman holds a Bachelor of Arts degree in economics at the Seethalakshmi Ramaswami College, Tiruchirapalli, and a Master of Arts degree in economics and a Master of Philosophy degree from Jawaharlal Nehru University, Delhi.