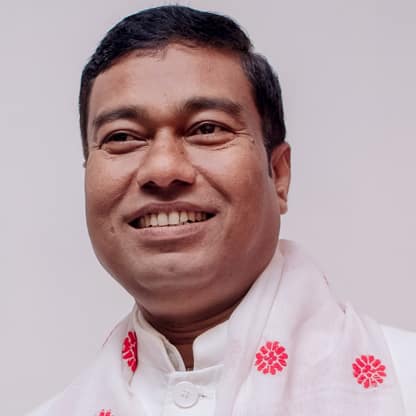 Hon'ble Shri Rameswar Teli was appointed Minister of State in the Ministry of Petroleum & Natural Gas and Minister of State in the Ministry of Labour & Employment in July 2021. Prior to this, he served as Union Minister of State, Ministry of Food Processing Industries from May 2019 to July 2021. Before his ministerial appointments, Honorable Shri Teli held elected roles in the 16th and 17th Lok Subha from 2014 to 2019. During this time, he was a member of the Committee on Public Undertakings from 2016 to 2019 and a Member of the Standing Committee on Industry Member, Consultative Committee, Ministry of Development of North Eastern Region from 2014 to 2019. He began his government career as an elected member of the Assam Legislative Assembly, serving two terms from 2001 to 2011. Honorable Shri Teli is the publisher of a fortnightly Assamese newspaper “Sirish” based on Tea Tribe. He is also the Founder Secretary of Assam Tea Tribe Student Association (ATTSA) Duliajan branch; Organizing Secretary of ATTSA Central Committee; Producer of "Theater Nayan Tara" based on the culture of Tea Tribe; and Chairman of the nongovernmental organization Pratishruty .