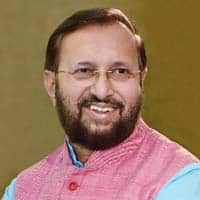 Prakash Javadekar is known as an intellectual politician, a strategic planner and an executer in mission mode. A staunch advocate of people centric policies and reforms, he is respected for his impeccable integrity, passion and commitment towards welfare of society at large. He has been guided by the principle of achieving sustainable and balanced development while preserving the environment. He is currently the Union Minister of Environment, Forest & Climate Change, Information & Broadcasting and Heavy Industries & Public Enterprises in the second term of Narendra Modiji led NDA Government. He has also been the Union Minister of Human Resource Development in the previous term of the Narendra Modi led NDA Government. He is a Rajya Sabha MP from Maharashtra. He has been elected as the Member of the Upper House of the Parliament three times, twice from Maharashtra and once from Madhya Pradesh. He has been one of the prominent faces of the party in Media as a spokesperson for several years. His media management skills are widely acknowledged. He is well known for his easy accessibility for the public. He always encourages new ideas and innovative work. He is committed to the cause of good governance and is also a believer in people’s participation in working of the Government, especially through the involvement of stakeholders.