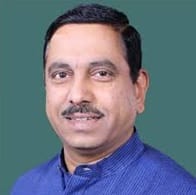 He did Bachelor of Arts and educated at K.S. Arts College, Hubli and Karnatak University, Dharwad, Karnataka.