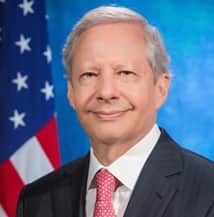 Ambassador to the Republic of India

Kenneth I. Juster was unanimously confirmed by the U.S. Senate on November 2, 2017 to be the 25th United States Ambassador to the Republic of India. Mr. Juster has almost 40 years of experience as a senior business executive, senior law partner, and senior government official.

Prior to that, Mr. Juster was a Partner and Managing Director, from 2010-2017, at the global investment firm Warburg Pincus, where he focused on a broad range of issues, including geopolitical risk, global public policy, and regulatory matters relating to the Firm’s investment activities and portfolio companies. From 2005-2010, Mr. Juster was Executive Vice President of Law, Policy, and Corporate Strategy at salesforce.com, a software company that pioneered cloud computing for business enterprises.

Mr. Juster served as U.S. Under Secretary of Commerce from 2001-2005, in charge of the Bureau of Industry and Security. In that capacity, Mr. Juster co-founded and served as the U.S. Chair of the U.S.-India High Technology Cooperation Group, and was one of the key architects of the Next Steps in Strategic Partnership initiative between the United States and India.

From 1992-1993, Mr. Juster served as the Counselor (Acting) of the U.S. Department of State, and from 1989-1992 as the Deputy and Senior Adviser to Deputy Secretary of State Lawrence S. Eagleburger.

From 1981-1989 and 1993-2001, Mr. Juster practiced law at the firm Arnold & Porter, where he became a senior partner and his work involved international arbitration and litigation, corporate counseling, regulatory matters, and international trade and transactions.

Mr. Juster holds a law degree from the Harvard Law School, a Master’s degree in Public Policy from the John F. Kennedy School of Government at Harvard, and a Bachelor of Arts degree in Government (Phi Beta Kappa) from Harvard College.