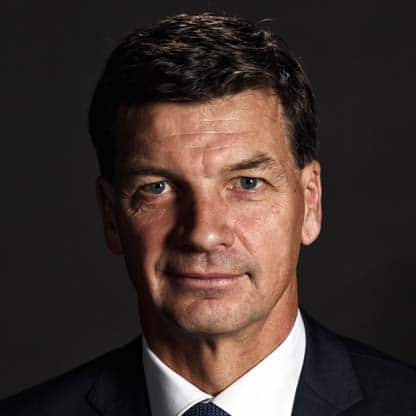 Angus entered politics in 2013 when he was elected as the Liberal Federal Member for Hume in New South Wales. Building on his background in economics, Angus was appointed to parliamentary committees on employment, trade and investment, and public accounts. He was also chair of the Joint Standing Committee on Treaties. Angus was promoted to Assistant Minister to the Prime Minister with special responsibility for Cities and Digital Transformation in February 2016. He was reappointed to the frontbench after the 2016 Federal election and became Minister for Law Enforcement and Cyber Security in December 2017. Angus was promoted to Cabinet as the Minister for Energy in August 2018, and reappointed as the Minister for Energy and Emissions Reduction in May 2019. With a passion for cutting edge technology and the benefits for citizens of the digital age, Angus authored an essay The Promise of Digital Government which was published by the Menzies Research Centre in 2016. He has gained a reputation amongst his constituents as a keen problem solver, focusing in his electorate on growth opportunities for regional communities and improving telecommunications. Prior to entering parliament in 2013 Angus was a Director at Port Jackson Partners where he was a strategy and business advisor on the resources, agriculture, energy and infrastructure sectors. Prior to this he was a partner at global consulting firm McKinsey & Co. Angus has a Bachelor of Economics (First Class Honours and University Medal) and a Bachelor of Laws (Honours) from the University of Sydney. He also has a Master of Philosophy in Economics from Oxford, where he studied as a Rhodes Scholar. His thesis was in the field of competition policy. In his private capacity Angus has founded or advised a number of small, fast growing start-up businesses, particularly in the agriculture sector. He lives at Goulburn with his wife Louise and their four children.