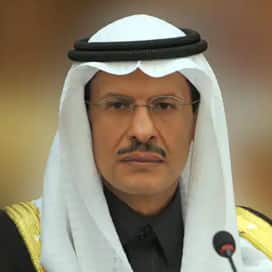 His Royal Highness Prince Abdulaziz bin Salman Al-Saud was appointed Minister of Energy in September 2019. In his capacity as Minister of Energy of Saudi Arabia, Prince Abdulaziz is responsible for coordinating the Kingdom’s domestic and international energy policies in line with the goals of Vision 2030. This includes overseeing energy activities within the Kingdom; regulating the oil, gas, electricity, nuclear and renewables sectors in the interests of the Kingdom in the short and long term and directing Saudi international policy with regard to relations with producers (including through OPEC and OPEC+) and with consumers. He has been an active participant in shaping energy policy, both nationally and internationally, for more than 30 years and he is the chairman of many energy related organizations. Prior to his appointment as the Minister of Energy, Prince Abdulaziz served in numerous capacities in the Ministry over the past three decades, including as Minister of State for Energy Affairs, Vice Minister of Petroleum and Mineral Resources, Assistant Minister of Petroleum and Mineral Resources, Deputy Minister for Petroleum Affairs, and Adviser to the Minister of Petroleum and Mineral Resources. HRH holds a master’s degree in business administration (MBA) and a bachelor's degree in industrial management, both from King Fahd University of Petroleum and Minerals. After graduation, he served from 1985 to 1987 as Director of the Economic and Industrial Research Division of the Research Institute at King Fahd University of Petroleum.