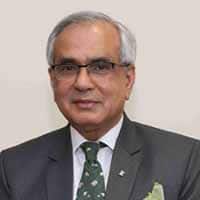 Dr. Rajiv Kumar is Vice Chairman, NITI Aayog, in the rank and status of a Cabinet Minister. He also serves as the Chancellor of Gokhale Institute of Politics and Economics, Pune. His earlier stints in government have been with the Ministry of Industry and later in the Ministry of Finance as an economic advisor during the reform years of 1991 to 1994. He also has served as an Independent Director on the Central Boards of the Reserve Bank of India and the State Bank India. He has a wide variety of experience, having worked in government, academia, industry associations, and at international financial institutions. Dr. Kumar holds a PhD in economics from Lucknow University, India, and a Doctor of Philosophy from Oxford University, United Kingdom.