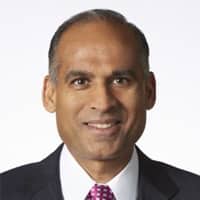 Bhavesh V. (Bob) Patel is chief executive officer of LyondellBasell, one of the largest plastics, chemicals and refining companies in the world. Mr. Patel assumed this position in January 2015 after having served as executive vice president, Olefins and Polyolefins – Europe, Asia and International and previously senior vice president, Olefins and Polyolefins – Americas. Mr. Patel joined LyondellBasell in March 2010 and as executive vice president successfully led the restructuring of the company’s O&P – Americas, O&P – Europe, Asia and International (EAI), and Technology segments, focusing on achieving best-in-class operational and commercial excellence. In this role, Mr. Patel led early stage development of the company’s plan to capture the U.S. shale advantage. This plan, which began with debottlenecks and capacity expansions, has progressed to major organic growth projects and continues to guide the company’s strategy today. Prior to becoming CEO, Mr. Patel was responsible for all of LyondellBasell’s manufacturing facilities in EAI and commercial operations for the O&P – EAI and technology segments. In 2011, he led the effort to establish a new business model for the O&P – EAI segment which structurally repositioned the business, increasing overall competitiveness, efficiency and earnings. As CEO, Mr. Patel has focused on leading the next phase of the company’s long-term growth strategy, including the 2018 acquisition of A. Schulman, Inc., which made LyondellBasell the world’s largest manufacturer of compounded materials. Under his leadership, the company has made several strategic acquisitions in growing markets and is building new production facilities around the world, including a new world-scale high density polyethylene (HDPE) plant and the world’s largest propylene oxide and tertiary butyl alcohol (PO/TBA) plant. Under Mr. Patel’s leadership, in 2018 LyondellBasell was named to Fortune Magazine’s “world’s most admired companies” list for the first time in its history. Previously, Mr. Patel held positions of increasing responsibility at Chevron Corporation and Chevron Phillips Chemical Company for more than 20 years. Over the course of his career, Mr. Patel has held leadership positions based in the Netherlands, Singapore and the United States. Mr. Patel is a member of the Business Council, The Business Roundtable and he serves on the boards of the Greater Houston Partnership and Junior Achievement of Southeast Texas. Mr. Patel is also on the external advisory council of the College of Engineering at The Ohio State University and the dean’s advisory council for the Fox School of Business at Temple University. Mr. Patel serves on the board of directors of Union Pacific Corporation. He earned a Bachelor of Science in chemical engineering from The Ohio State University and he also holds a Master of Business Administration from Temple University.