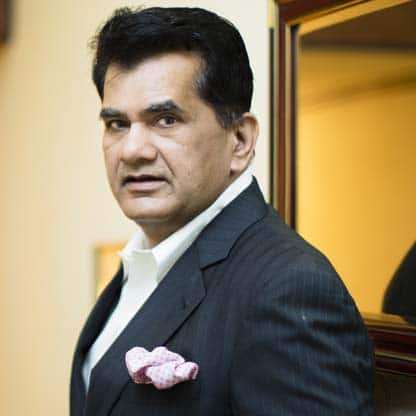 Amitabh Kant is presently CEO of National Institution for Transforming India (NITI Aayog). He is a member of the Indian Administrative Service, IAS (Kerala Cadre: 1980 batch). He is the author of Branding India-An Incredible Story, Incredible India 2.0 and has edited “The Path Ahead- Transformative Ideas for India”. Kant has been a key driver of the “Make in India”, Startup India, “Incredible India” and God’s Own Country” initiatives that positioned India and Kerala State as leading manufacturing and tourism destinations. These campaigns have won several international awards and embraced a host of activities – infrastructure development, product enhancement, private-public partnership and positioning and branding based on extensive market research. Amitabh Kant has been the Chairman & CEO of the Delhi Mumbai Industrial Corridor Development Corporation (DMICDC). The Delhi Mumbai Industrial Corridor (DMIC) is being developed by the Government of India as a global manufacturing and investment destination supported by world class infrastructure and enabling policy framework. The DMIC project is aimed at the development of futuristic, smart industrial cities in India which will converge and integrate next generation technologies across sectors. The DMIC cities will address not merely the urbanization requirements of India, but with manufacturing as the main economic base, will also contribute significantly to the economic growth of India. In his capacity as Secretary (Department of Industrial Policy and Promotion) Govt. of India, he vigorously drove the Ease of Doing Business initiative and ranking of States on outcome parameters. These initiatives have led to India making a quantum jump in the World Bank’s Ease of Doing Index and enabled Indian States to compete in the spirit of competitive federalism. He is the Chairman of the Committee to implement Digital Payment in India. Mr. Kant has been the recipient of Economic Times Policy Change Agent of the Year Award, the Bloomberg TV Personality of the year Award, the NDTV Administrator of the year Award and the Distinguished Fellowship of the Institute of Directors. He is the recipient of One Globe Award-2016 for leadership in Transforming Governance for the 21st Century. He is also the recipient of Sir Edmund Hillary Fellowship awarded by the Prime Minister of New Zealand. He is a Member of the Steering Board of “Shaping the Future of Production Systems” of World Economic Forum. He is also the recipient of Golden Peacock Award for Leadership in Economic Transformation-2017. Amitabh Kant has worked as CMD – ITDC, Joint Secretary – Ministry of Tourism, Government of India, Secretary – Tourism, Government of Kerala, Managing Director, Kerala State Industrial Development Corporation, District Collector, Kozikhode and Managing Director, Matsyafed. During his tenure in Kerala he structured the Calicut Airport as a private sector project based on User’s Free and developed the BSES Power Project and Mattanchery Bridge under Private Public Partnership. He was also responsible for introducing new technology (fiberglass crafts and outboard motor) in the fisheries sector and launching beach level auctions which substantially enhanced returns to traditional fishermen. Amitabh Kant did his schooling from Modern School, Delhi, graduation in Economics (Hons) from St. Stephens, Delhi University and M.A from Jawaharlal Nehru University. He is a Chevening Scholar. He has also undertaken a mid-term course with John F. Kennedy School of Government, Harvard University and Indian Institute of Management (IIM), Ahmadabad.